Senate President Bukola Saraki has withdrawn an application to stall his trial at the Code of Conduct Tribunal (CCT) pending the hearing of his suit at the appeal court. The senate president is facing trial at the CCT for alleged false declaration of assets. 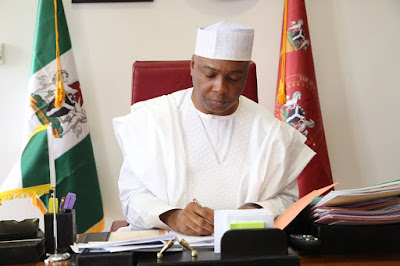 Read via The Cable; On Monday at the appeal court, Kanu Agabi, Saraki’s lead counsel, withdrew the application and asked the court to grant accelerated hearing to his appeal challenging the jurisdiction of the CCT to try his client. “When your lordship has read such a voluminous motion, it is unfair to say we are withdrawing. But we have to. We want to withdraw the motion,” he said. “In the motion, dated April 4, we prayed your lordship to stay proceedings at the CCT pending the hearing of our appeal. But we now want to urge your lordship to grant accelerated hearing to our appeal. “My Lord, we appeal to you to grant us accelerated hearing.” Rotimi Jacobs (SAN), counsel to the federal government, did not object to the request for withdrawal of the application. “I have no objection to the withdrawal,” he said. Abdul Aboki, who led a three-man panel of justices, thereafter struck out the application. On March 24, the CCT had dismissed Saraki’s application to stop his trial. Saraki, through Agabi, had urged the tribunal to halt his trial on the grounds that he was not given fair hearing by the Code of Conduct Bureau (CCB). But when the CCT dismissed his application, he then appealed against the judgment at the appeal court.

The appeal court is yet to fix a date for the hearing of the substantive suit.

Man Commits Suicide After Suspecting His Wife Was Sleeping With Landlord….