The Seme Area Command of Nigeria Customs Service has once again demonstrated the synergy that exists between the Service and other relevant Sister Security Agencies at the border. 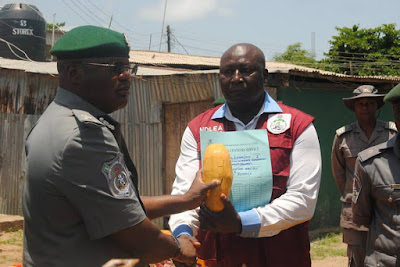 Comptroller Dimka, V.D handed over the two suspects (Mr. Abdullahi Ismail and Mr. Valentine Malizu) who were arrested for being in possession of forty (40) wraps of substances suspected to be illicit hard drugs concealed inside cartons of crayfish. The seized drugs weight about 43.4kg with a value of N412,300.00. The seizure was made possible by the Border Patrol Crack Team ‘A’ led by CSC Ozah, M.O. Acting on intelligence report, the information received was properly and timely handled, the careful usage of the information paid off when the two (2) suspects were arrested. As a Crack Team that act swiftly on information gathered, the forty (40) parcel of the substance suspected to be Indian hemp was arrested by the Team on the 17th April, 2016 by 1700hrs at Elijah. An attempt by the suspects to bribe the Border Patrol Officers was resisted. The suspects were also found to be in possession of over nine (9) different SIM cards and assorted charms. The handing over was performed by the Customs Area Controller to Senior Narcotics Idrees, D.U who represented the Commander of the National Drug Law Enforcement Agency (NDLEA) Seme. After the handing over, the CAC re-iterated that the tempo of aggressive patrol within the border will be sustained by his vigilant officers. He warned that all those involved in trans-border crimes should desist from the act or they will continue to face the full wrath of the law.

The National Drug Law Enforcement Agency authority said that scientific analysis of the illicit drugs and the subsequent prosecution of the suspects in court will be the next line of action.

Photo; Checkout The Muscled And Chiseled Body On This “22-Year-Old” Gymnast.