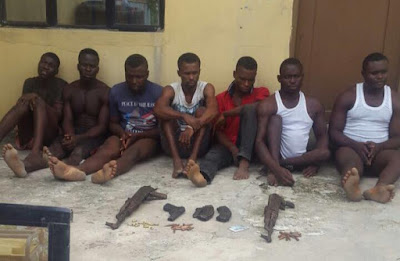 These kidnappers were arrested this early morning in Buguma town, Rivers state after a team of policemen stormed their hideouts and arrested seven of them. The suspects engaged the operatives in a shoot out before they were over powered and arrested.

Two AK47 rifles, one bereta pistol and 39 rounds of assorted live ammunition were recovered from the suspects.

Young Female Soldier Who Died Months After Her Engagement Has Been Buried. Photos