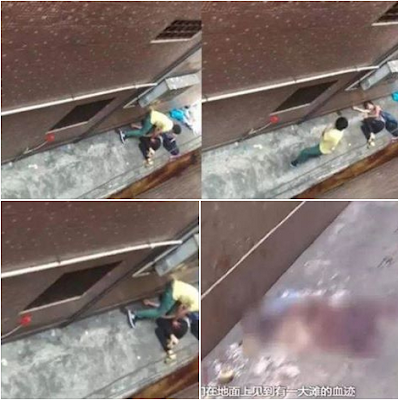 A 20-year-old woman was stabbed to death in a valley by her boyfriend, who suspected that she had cheated on him, on April 7, 2016, in Dongguan, south China’s Guangdong province. She died after being rushed to hospital.

Later, a footage goes around online, in which the said victim was clearly seen stabbed three time in the waist and she voiced out a piercing long cry. The footage appeared to be shot on balcony of a building right next to the crime scene.

Web users and local residents were shocked, questioning why the person who recorded the video did nothing. u7The suspect has been arrested, thanks to another man who saw him running away and called the police.

Banker Hires Assassins To Kill Her Ex-Husband In Lagos. Pictured

Governor Obiano Leads The First Set Of Buyers In The New Shoprite In Onitsha. Photos