One year ago, a tiny baby girl was born, named Sklya Robertson. She came 14 weeks early, and weighed in at only 1lb and 3oz. Her umbilical cord’s blood flow was reversed, she was being starved, and in serious danger. 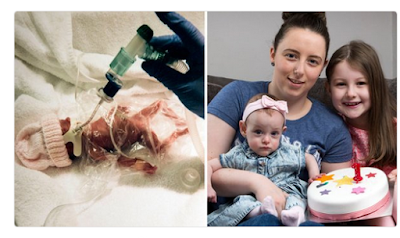 She had to be delivered by cesarean section immediately. Doctors were convinced the baby had little, to no chance, of surviving because of her weight. There were other complications causing concern also, like if she wasn’t born breathing, she would be too small to resuscitate. Skyla not only survived, but has thrived, in spite of the fact that she is still under weight in comparison to other children her age, and has a hole in her heart. Skyla is a real little miracle baby, and a fighter. We are so happy she is doing well, and we wish you a Happy Birthday Skyla! Culled from Faith Reel

Tiger Escapes Enclosure After Visitor Provoked It By Throwing Chewing Gum At It.. Pics