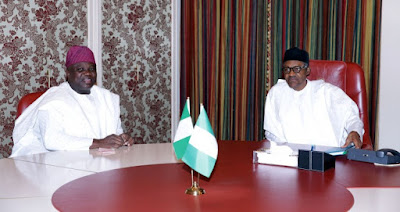 Governor Ambode who spoke to State House Correspondents shortly after the visit expressed high optimism that the President’s trips would in no short time begin to yield benefits in the interest of all Nigerians.

The Governor specifically commended President Buhari for his purposeful leadership to restore the nation’s place in the comity of nations, saying his recent trip to China and the profitable discussions will go a long way to move Nigeria forward, including Lagos.

He said the investment pact signed with the Chinese Government will benefit the people of Lagos, especially with the coming of the Lagos-Kano Rail Project and the Lagos Metro-rail project expected to cost about $2.5billion.

Police Arrest Isheri Kidnap Mastermind, Reveals How Much He Got From Ransom. Photo