Here are pictures of Babatunde Abisuga, a former accountant of the Federal Civil Service Commission, who bagged six months jail term after being prosecuted by the EFCC on a five count charge bordering on offences of Criminal Conspiracy, stealing, forgery and using as genuine forged documents. 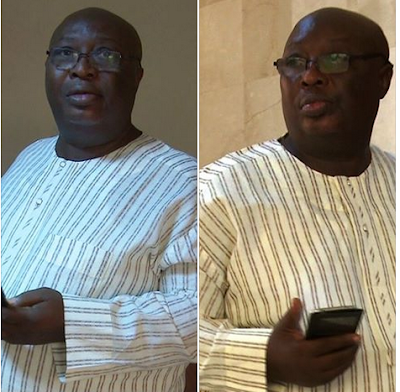 The Abuja High Court sitting at Maitama, Thursday, sentenced a former accountant at the Federal Civil Service Commission,‎ Mr. Babatunde Abisuga to six months imprisonment over his involvement in N109million pension fund. Abisuga was convicted by Justice Maryann Anennih on the basis of a seven-count charge the Economic and Financial Crimes Commission, EFCC, preferred against him. A statement by EFCC Head, Media and Publicity, Mr. Wilson Uwujaren revealed that the defendant was handed the six months jail term without option of fine after he brokered a plea bargain with the Commission. Whereas the defendant was handed three months imprisonment on Counts 1 and 2 of the charge, the court gave him six months on Counts 5, 6 and 7 without an option of fine. The sentences are to run concurrently. According to Justice Anennih: “The conviction is not to punish but to reform the accused person and to deter the public from the ‘get quick rich syndrome.” Abisuga was said to have through his counsel, M. A. Ebute, sought to explore the option of plea bargain since the proceed of the alleged crimes had been recovered in full and handed over to the Federal Civil Service Commission. The court acceded to his prayer following which the prosecution amended the charge by separating him from his co-defendant and reducing the counts to five. He was convicted on all the five counts of stealing, abuse of office and forgery.