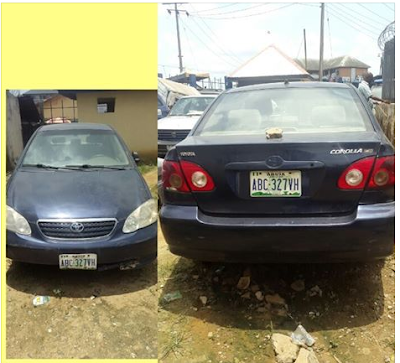 According to a Facebook user (Soty Ray), this car has been in police custody for months now without any particulars or any other form of claims to it… Read what he wrote below;

Today as usual I went to the police station & saw this car parked.The DCO said that the car was seen along the road in December 2015 (obviously a stolen car, maybe from another state even). Four months in police custody & nobody has come to claim it. No vehicle particulars or any document to trace the owner.

If the car is yours pls contact the DCO of Nkpolu, Mile 3 police station (UST junction)… Help rebroadcast till it gets to the owner.

“Sharpen Your Eyes”; Watch What Happened After This Man Attacked His Unsuspecting Victim.