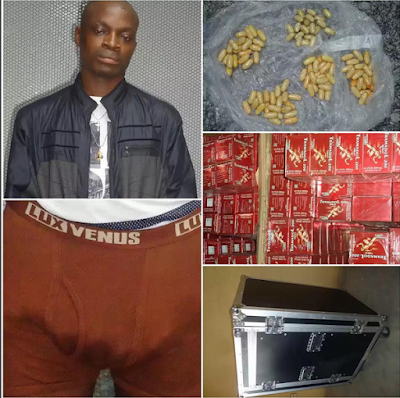 Officers of the National Drug Law Enforcement Agency (NDLEA) have discovered twenty-eight packs of Tramadol weighing 21.99kgs inside a DJ Rack box and 1.8kgs of cocaine in boxer shorts.The seizure was made at the Murtala Muhammed International Airport (MMIA) Lagos. The Tramadol which was hidden among camera items was intercepted during pre-shipment inspection. The consignment was destined for Congo Brazzaville in central Africa. Another suspect was also caught with 1.8kg of cocaine in his boxer shorts on his way from Dubai. Both suspects are being investigated. NDLEA commander at the airport, Ahmed Garba gave the names of the suspects as Afube Izuchukwu Henry, 27 year-old automobile parts dealer and Chijioke Chukwuemeka Raphael, 36 year-old factory worker in Dubai. According to Garba, “Chijioke who deals in automobile parts was arrested for attempting to export 21.99kgs of Tramadol hidden inside a DJ rack box meant for export to Congo Brazzaville. Another suspect, Chijioke Chukwuemeka Raphael, a Dubai based factory worker was arrested with 1.8kgs of cocaine packed inside socks and concealed in his boxer shorts during the inward screening of passengers on an Emirate flight from Dubai”. Afube who hails from Anambra and married with two children said that he only acted on his elder brother’s instruction. “I am an auto parts dealer. My brother who lives in Congo asked me to send a DJ Rack box to him. Unfortunately, when I took the box to the airport, NDLEA discovered tramadol inside it during search and I was arrested in the process” he stated. Chijioke said that he was offered four hundred and fifty thousand (N450,000) naira to smuggle the drug to Nigeria. In his words, “I am a factory worker in Dubai for the past six years. I am married with three children but I cannot take good care of my family. I work from hand to mouth and I am tired of working without seeing the benefits of my labour. I met a man seven months ago in Nigeria who introduced me into drug trafficking. He promised me a better job in Nigeria and offered me N450,000 naira. I accepted the offer because I wanted to come back home and start a better job”.

He hails from Enugu State.

Naked Russian Men Taser Themselves During Dinner Party After Getting Drunk. Photos

Dangote Truck Rams Into A Street Light In Mushin Area Of Lagos. Photos