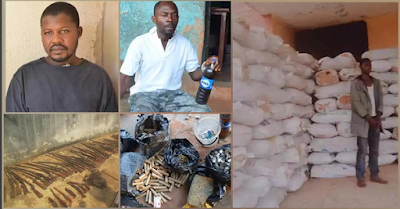 Those arrested include 60 males and 13 females. A cannabis laden Toyota Hilux and a J5 Bus with cannabis disguised as pineapple shipment were also impounded. A cannabis warehouse located at Okpuje forest, was detected and 2,590kgs of cannabis were seized.

The premises of 4 suspected major drug dealers were raided. They are Zakari Ogie, 38, a.k.a. Kowa, Solomon Alegbe, 34, Famous Ossai, 32, and Juliana Ogiefa, 60. Two cannabis dealers from Sokoto, Umar Abubakar and Shuaibu Garba were caught with 1,026.5kgs. Kowa, the owner of Kowa-Denasa Guest House in Auchi, was arrested with 500gm of cannabis and 6.6kg of alcohol mixed with cannabis. Ossai’s house was raided and 6.5kg of cannabis was recovered. 900gm of cannabis and 2 litres of alcohol mixed with cannabis was recovered at Alegbe’s house.

Ogiefa had been charged for dealing in substances found to be cocaine and heroin, only to be rearrested while on bail. 5 young farmers from Taraba and Plateau States were caught at a cannabis farm at Utesse forest. They’re offered N70,000 each, to cultivate cannabis for a season….

Photos Of Aisha Buhari, Zahra And Others At George Mason University In Virginia