Cristiano Ronaldo was all smiles as he landed with his Portugal teammates in Lyon on Tuesday afternoon ahead of the showdown with Wales today.. Portugal and Wales which were the underdogs in the European tournament -shocked the football world after advancing into the semi-finals histrorically. 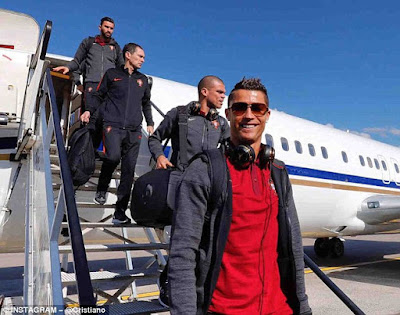 Meanwhile, Wales are preparing for the biggest game in their history when they play Portugal in Lyon on Wednesday for a place in the final of Euro 2016. Chris Coleman’s side have already enjoyed a memorable run to reach their first semi-final at their only major tournament since 1958. More than half of Wales’ population of three million are expected to watch their country take on regular European semi-finalists Portugal – eclipsing the national television record for a sporting event, which was only set on Friday for their 3-1 quarter-final victory over Belgium.

The Prince of Wales sent the team a “huge good luck” message, saying: “I’m sure they have got a very good chance of beating Portugal. Everyone here will be keeping their fingers crossed.”

Photos Of UK Based Nigerian Man Accused Of Defrauding Ladies With Fake Love….

See The Moment Madam Cash,Pastor & Others Were Nabbed For Child Trafficking. Photos

Man Rescued With Hacksaw After Getting His Manh00d Stuck In A Bottle. Photos