Three workers in Enugu State University of Technology Teaching Hospital, Parklane, have landed in police net for allegedly gaining employment with forged letters, purportedly written by Governor Ifeanyi Ugwuanyi. It was learnt that the said letters bore the official letterhead of the Office of the Governor and also had the governor’s signature. 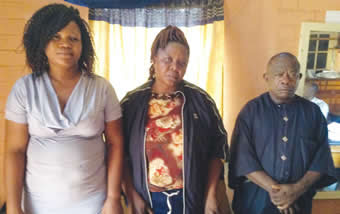 The suspects, Onuoha Gloria, Onwuameze Roseline and Thomas Nwigwe, were reportedly employed as accountant on Grade 11, Level 7, Higher Executive Officer Level 8 and chief typist CONTISS 8, Step 13, respectively. Spokesman, Enugu State Police Command, Mr. Ebere Amaraizu, who confirmed the development, disclosed that one Chijioke Nzegwu facilitated the forged letters. It was gathered that Nzegwu received an unspecified sum of money from Nwigwe on behalf of himself and other suspects, to raise the letters. Amaraizu said Nzegwu was on the run, stressing that the police were on his trail and would surely bring him to book. The state police spokesman added that the Command had commenced investigations into the criminal act. Southern City News learnt the employment scam was uncovered after some employees of the hospital, who were suspicious of irregularities in the appointment of the new workers, raised the alarm.

World's Most Expensive Footballer Paul Pogba Shows Off His Dancing Skills In His Shorts. Video

See The Naira And Dollar Rain Experienced At The Wedding Of A Nigerian Couple. Photos