Governor Ayodele Fayose of Ekit State has expressed worry over inability of the Independent National Electoral Commission (INEC) to conduct credible and conclusive elections since the advent of the President Muhammadu Buhari led All Progressives Congress (APC government. 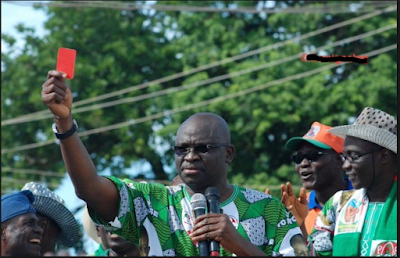 The governor, who reacted to the alleged manipulation of the Imo North Senatorial election, which was declared inconclusive,said “democracy in Nigeria is being threatened by INEC and this should call for national and international reflection. ” Special Assistant to the governor on Public Communications and New Media, Lere Olayinka quoted the governor as saying that, “If we have done more than 15 elections since President Buhari assumed office and all ended inconclusive, it is obvious that we are tending towards anarchy. “It is becoming very clear that votes of Nigerians are no longer allowed to count under this APC government and one wonders if President Buhari would have been elected if the system then did not allow free and fair elections. ” Governor Fayose said Nigerians should be more concerned with institutionalising democracy than the issue of who wins election, adding that, “The only duty the APC government owes Nigerians is to allow for a system that will make them to be able to elect their leaders freely. “This system was created and allowed to flourish by the Peoples Democratic Party (PDP) government. The APC, which is obviously desperate to hijack power at all levels through open manipulation of the electoral process must know that preventing people’s votes from counting is a clear invitation to anarchy. “As it is, APC stalwarts are using security agents to unleash violence on Nigerians during elections because they know that the president won’t lift a finger provided his party members are the ones perpetrating electoral evil. ” The governor said the INEC Chairman, Prof Mahmood Yakubu should be worried about the image of the electoral commission under him. While urging INEC to be mindful of its importance to the sustenance of democracy in Nigeria, Governor Fayose said the electoral body must maintain its independence and impartiality at all times. “Nigeria was already getting that important aspect of democracy, which is election right before the advent of this APC government and the government, especially INEC should be mindful of what history will present concerning them,” said Fayose.

Governor Fayose In A Sad Mood As He Visits Victims Of Fatal Accident In Ekiti State. Photos

See The Moment Woman In A Bra Used Her Cleavage To Stop A Spinning Disc. Photos