A Christian man reportedly had his arms cut off when he refused to convert to Islam after being kidnapped by Muslim extremists. Petrol pump worker Aqeel Masih says he was taken from the LDA quarter of Lahore, Pakistan. 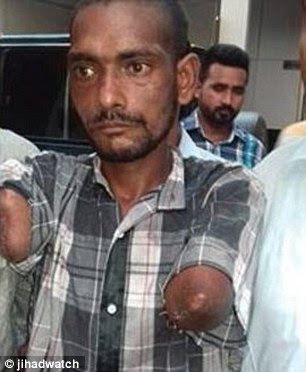 He claims his kidnappers whipped and tortured him, even though the the Quran states: ‘Let there be no compulsion in religion.’ When he refused to renounce Christ and accept Allah as his God, they cut of his arms in brutal punishment, he said. A Christian organisation in Pakistan wrote:

‘The extremists exerted pressure on him to abandon Christianity and convert to Islam.’

‘Aqeel however, did not give up on his Christian faith and refused to comply with their demand.

‘Notwithstanding…his rebuttal, they chopped off his both arms, and absconded,’ wrote Legal Evangelical Association Development.

Masih has reportedly filed a lawsuit against the extremists and yesterday appeared at Ghalib Market police station. But police do not believe his story and think it is more likely that he lost his arms in a train accident. RELA

See The Moment A Passenger Plane Is Struck By Lightning In Mid-air. Photos

“Why Are Nigerians Like This?” — Cyprus Based Man Laments After Receiving This Message.