The Minister of Youth and Sports Barrister Solomon Dalung has congratulated the official Bankers of the Nigeria Olympic Committee Union Bank Of Nigeria PLC for doling out N250,000 to each athlete participating at the 2016 Olympic Games in Rio. 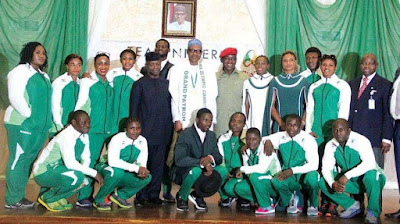 Each member of ‪‎TeamNigeria‬ and ‪Paralympic‬ athletes will get the money credited to their accounts as soon as they forward their account details to the Nigeria Olympic Committee. If the athletes are unable to send their account details, the money will be credited to Visa or Master cards with the names of the athletes on it, according to NOC Secretary-General, Tunde Popoola. Union Bank of Nigeria PLC also pledged N5million to the NOC as support for logistics and other administrative bills. Barrister Dalung thanked Union Bank of Nigeria PLC for coming in to assist and boost the morale of the athletes at a time the country was faced with financial set backs. He said that this single effort by Union bank will once more lift the spirit of the athletes ahead of the games which start on August 5 , 2016. The Minister called on other private and corporate organizations to take a queue from Union bank as government alone can no longer solely fund sports. ” When we invest in our youths and sports, we are investing in the future but when we don’t help our youths through sports or other skills acquisition, we are preparing for a harvest of criminals in future so I’m pleading with other corporate bodies to come forward as it is never late to help our youths especially now that athletes are faced with so much hardship due to the state of the country’s economy” Dalung said. Athletes are expected to start leaving for Rio on Friday. The basketball team leaves on August 3, 2016 after playing a game in Houston on the 2nd of August while the football team will start moving from Atlanta on July 29th, 2016. NNEKA IKEM ANIBEZE SA MEDIA

Cristiano Ronaldo Mobbed By Fans As He Lands In Portugal With Girlfriend. Photos

“President Buhari Likes Cartoons”; See What They Did To Him. Photos