A Ugandan lecturer stripped unclad in protest after being locked out of her office by her boss at Makerere University. She claimed her boss was forcing her to teach at the university while she was only contracted to do research work and not teaching. She later went on Facebook to post the video and captioned it:

. “I have thrown my clothes outside Prof. Mamdani’s office. I am naked as I cry out for my office.” She also chained herself before the university gave in to her demands and let her back to the office. She was initially removed from her office after she refused to teach in the MPhil/PhD program…. 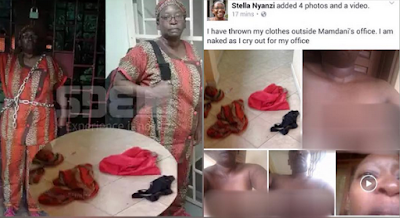 Photos Of Miracle Baby Born With Her Heart Outside Her Chest. (Viewers Discretion)

Family On The Run For Allegedly Bathing 11-Year-Old Girl With Hot Water….