An elderly Christian woman has been caned in Indonesia, the first time a Sharia law punishment has been meted out to a non-Muslim. The 60-year-old, who was convicted of selling alcohol, was whipped nearly 30 times with a rattan cane, before a crowd of hundreds, in Aceh province on Tuesday, according to reports. 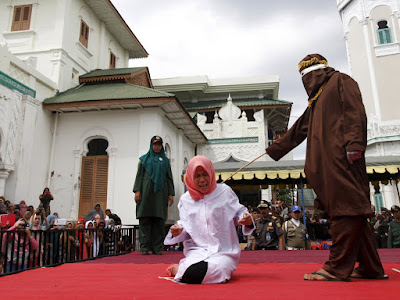 A couple who had been found guilty of adultery received 100 lashes at the same time. Aceh is the only province in Indonesia that applies Sharia law, with public canings, often in front of huge crowds, commonplace.

Under Aceh’s strict Islamic code, introduced after it was granted special autonomy from Jakarta in 2001, corporal punishment is imposed on adulterers, gays, drinkers and even those who speak to unmarried members of the opposite.

Hardened Vandal Gets Arrested After Days Of Regaining Freedom For Stealing In Lagos. Photos