This is the moment the All Progressives Congress (APC) national leader -Bola Tinubu told senator Ben Murray-Bruce; “Don’t take the N36million jeep, I hope you did not collect?”… This was on Sunday after the APC leader was honored as Silverbird’s Extraordinary Man of The Year. 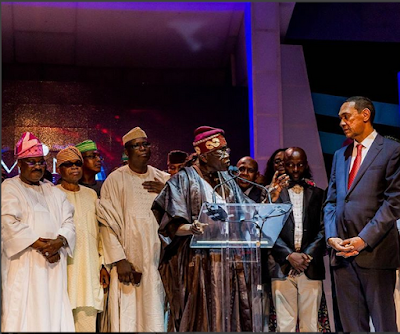 This was revealed by the personal photographer of governor Abiola Ajimobi of Oyo state -(Tolani) Meanwhile, the Senate has justified its decision to buy 36 Sport Utility Vehicles for its members just as it clarified that the money was sourced from its 2015 budget. Chairman, Committee on Senate Services, Senator Abdullahi Gobir, who made the clarification in an interview with journalists, also described as untrue, insinuations that senators collected car loans, shortly after inauguration of the 8th Senate. He said each of the senators from the 36 states, who are either chairman or vice-chairman of committees, got a vehicle, with the understanding of their two other colleagues. He also put the value of each of the  Land Cruiser VXR V8 vehicles at N36.6m including the cost of purchase, and other taxes.