A 27 year-old man arrested by the operatives of the Rapid Response Squad of the Lagos State Police Command along with seven others for robbing passers-by in Ojota, Ketu and Mile 12, at night, has disclosed that he has lost count of the number people that he had robbed in those areas. 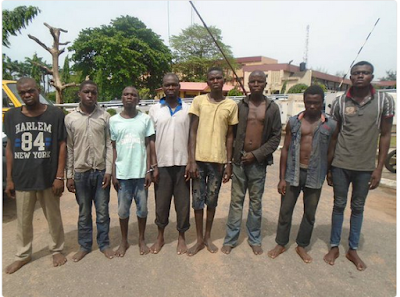 The suspect, Dapo Simeon, a trained bricklayer from Oyo State, told the police that he started with pick-pocketing more than 3 years ago before graduating into robbery. He pointed out that he specialised in stealing phones, jewellery and money. “I can’t remember the number of phones I have stolen and collected from passers-by in Ojota, Ketu and Mile 12. I was trained by Olasege and later Femi. Both of them are my bosses. They live in Mushin, Idi-Oro area. They taught me the job,” the suspect claimed. He continued that “I sell all the phones I get at night or the previous day to Baba Iyabo. He comes to Down Blow area in Mile 12 to collect the phones and jewellery very early in the morning.” Simeon and his colleagues were picked up on Thursday morning when two young women he robbed on Wednesday night at MKO Garden near Ojota reported to RRS monitors attached to Ojota . The operatives followed the women to the scene of the robbery where they met two men, John Obinna and Sunday Ugwu. The officers, after interviewing and searching the duo, saw the suspected stolen phones and an unused sim card, which was traced to its original owner, Mr Adebayo Ogunleye. Mr. Ogunleye in his statement at the RRS Headquarters, Alausa, noted that he was waylaid by an assailant between Ojota and Mile 12. He stated that the robber while trying to collect his two phones, matcheted and head-butted him into surrendering his phones (Microsoft Lumia 535 & Tecno T5) and a wallet containing BVN Card, First Bank verve card and MasterCard among others. “It was God’s intervention that I was not killed that night as I was struggling for survival, drinking my own blood before I was able to cross to the other side of the road and escape,” he noted. The arrest of John Obinna and Sunday Ugwu by the operatives prompted the arrest of 6 other suspects, namely, Dapo Simeon, Chinonso Onnogo, Chuka Eze, Kadir Afolabi, Segun Pascal and David Bassey. They all confessed to have been robbing people at night in Ojota, Ketu and Mile 12. According to the Police PPRO, Dolapo Badmos, all the suspects confessed and they have given the police useful statement that would assist the force in clamping down on others.

They have all been charged to court.

Meet The Olympic Swimmer Who Gives His Father The Middle Finger Before Any Race.. Photos

See What A Man Did To Show His Support For Buhari After Budget Presentation….