Rivers State Governor, Nyesom Ezenwo Wike has stated that the painful general hardships flowing from the country’s economic crisis affect all Nigerians, hence all hands must be on deck to resolve the challenges. 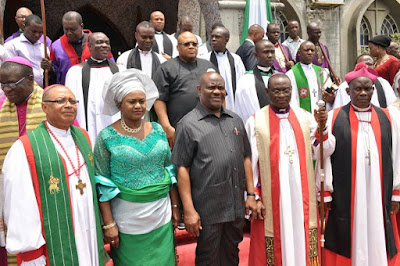 He also said that his administration has already established a working framework to shield the people of Rivers State from the negative effects of the economic downturn. He spoke on Sunday at the Saint Cyprian Anglican Church, Port Harcourt during the Inter-denominational Church Service to mark Nigeria’s 56th Independence Anniversary. He said: “The hardship that flows from the economic downturn affects all Nigerians, irrespective of the political party they belong to or whether they don’t belong to political parties. “That is why we must work together to ensure that we end the economic recession. It is in our interest as a nation that we continue to build alliances, as this economic recession cannot be resolved through methods that exclude other stakeholders “. The governor stressed that Rivers State will continue to be viable with the state government executing pro-people projects, whether or not Nigeria is in recession. He urged Nigerians to celebrate the fact that the country is still united despite the different challenges that it has faced over the years. Governor Wike called for more prayers for the country to make sustained progress in the coming years. In his sermon, Bishop of Anglican Niger Diocese, Rt Reverend Raphael Ebirien urged the Federal Government to focus on resolving the current economic recession as Nigerians are suffering. He also called for justice, fair play and equitable distribution of resources to reduce the level of marginalization under the present situation in the country. The Inter-denominational Church Service was attended by leading clerics in Rivers State, service Commanders and officials of the Rivers State Government. Simeon Nwakaudu, Special Assistant to the Rivers State Governor, Electronic Media. 25th September, 2016. 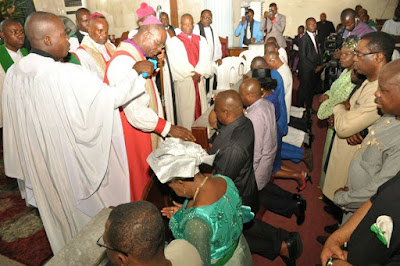 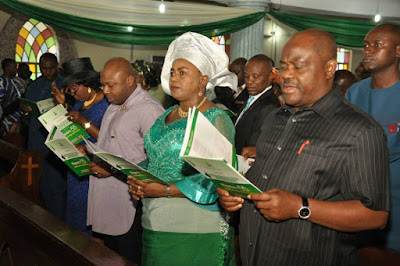 Groom And 7 Others Die In A Fatal Accident After Wedding Ceremony In Gombe. Photos

“Love In The Air”; Between Gov Yahaya Bello And His Pretty Wife In His Office. Photos