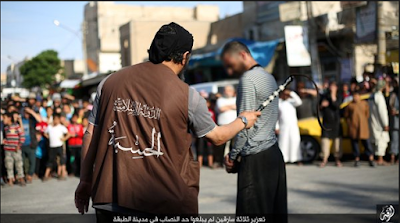 They were whipped 30 lashes in a public square in front of a crowd of people in central Mosul, for playing a game, “which is prohibited in Islam”. The execution took place in Mosul, Iraq in front of a large gathering. This came in order to create a state of fear and panic among the people.

Confusion As Players Fall To The Ground During Match After Police Fired Tear Gas. Photos

Goodluck Jonathan And Wife Patience All Smiles As They Meet With PDP Senators. Photos