Zimbabwean President Robert Mugabe has made mockery over the latest rumours of his health, joking that he had died and was resurrected. President Mugabe, 92, was arriving back in the country at the main airport in Harare and appeared jovial as he disembarked 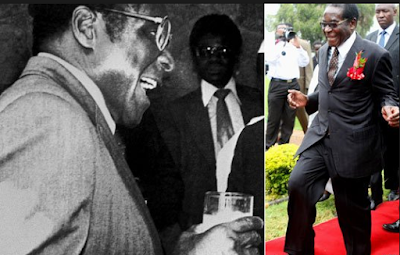 Flight data had suggested his plane was heading to East Asia but that it instead went to Dubai. President Mugabe said he had gone there for a family matter. In May, the leader’s wife, Grace, said that he would rule from the grave. The flight path and other rumours had led some to speculate that President Mugabe had suffered a serious health problem and had sought treatment in Dubai or had even succumbed to his illness. The Southern Daily website had posted an article headlined “Robert Mugabe suffers stroke, Mnangagwa now the new interim President of Zimbabwe”. Emmerson Mnangagwa is the country’s vice-president. But Reuters news agency said that on arriving at Harare President Mugabe had told reporters in the local Shona language:

“I had gone on a family matter to Dubai concerning one of my children.“Yes, I was dead, it’s true I was dead. I resurrected as I always do. Once I get back to my country I am real.

Buhari Speaks On 'Aso Rock Cabal': “I’m In Charge Of The Presidency, Not Daura”

“It's Official”; Zlatan Ibrahimovic Confirms His Departure From Paris Saint-Germain