A South African woman has been arrested with cocaine concealed in her bra at Lagos airport. Lekganyane Lerato, 34, was arrested with 1.210kg of cocaine while trying to smuggle it from Nigeria to her home country. She was arrested at the Murtala Muhammed International Airport (MMIA), Lagos, in the process of boarding a Johannesburg-bound plane. 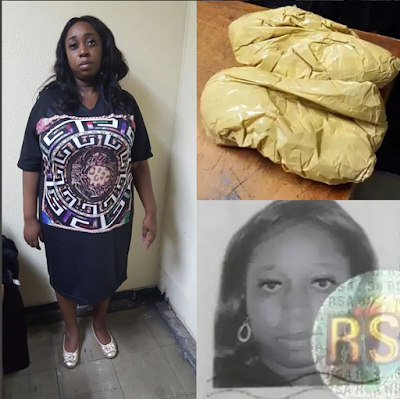 The agency’s spokesperson, Mr Mitchell Ofoyeju disclosed this in a statement Saturday;

” A South African lady’s attempt to smuggle 1.210kg of white powdery substance that tested positive for cocaine to South Africa had been foiled by anti-narcotics officers. ”The 34year-old Lekganyane Lerato who is an apprentice chef had two parcels of cocaine carefully concealed inside her brassiere on her way to Johannesburg when she was arrested.

”The drug was detected by a female operative agency at the Murtala Muhammed International Airport (MMIA), Lagos, during screening. “The suspect was intercepted during routine screening of passengers on South African airline. The drug was neatly concealed, but certainly not good enough to escape our notice.

”She is currently under investigation, but will be charged to court very soon,” it said.

Buhari Speaks On 'Aso Rock Cabal': “I’m In Charge Of The Presidency, Not Daura”

Driver Runs Into A Ditch In Gbagada, Lagos After Experiencing Brake Failure. Photos