A woman named Amina Banaga Maru from Gusau Zamfara State capital -allegedly attempted to kill her husband after stabbing him with knife in the stomach three times . According to Rariya media which shared the pictures, the woman nearly murdered her man over plain jealousy.  The shocking incident happened in Gusau on Monday (yesterday). The man is currently receiving treatment in a hospital. 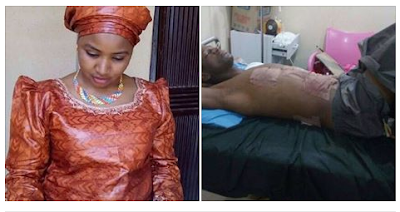 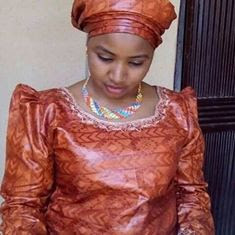 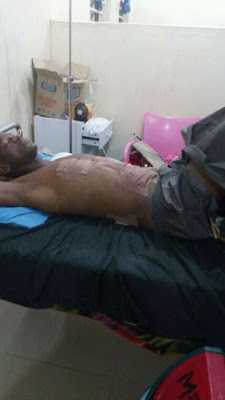 Here’s an update by Aishat Alubankudi;

Update: @Aishat Alubankudi: The lady in question stabbed her husband NOT because he is warming up for a new wife, but out of mere detestation. A reliable source revealed to me that the man has two wives already; Amina Maru (the accused) and the senior wife (names withheld). Amina, according to the evidence on ground is not contented with the affairs between her husband and the senior wife. She’s always accusing the husband of preconception and alleges that the man bought a new car for the senior wife, who is a top civil servant… On the faithful day, he was meant to spend the night at the accused apartment, since he has two separate houses. Unfortunately for him, he was invited to an impromptu business meeting with a top government official in the state. The meeting was over-stretch and at a point, the accused contends that he went to ‘Cuwa-cuwa’ with the ‘Uwargida’ in her home before coming to her house. She got infuriated. The anger therefore triggered her to dwell on him with a sharp knife while he was asleep.

The source also confirmed that the accused has been warning the victim to divorce her, if not, he’ll regret some atrocities. But he gave her threats a deaf ear. She target June 12 to carry out the barbarism because the day was their 1st marriage anniversary. She’s cooling her feet in the custody, while the victim is receiving treatment in Gusau, Zamfara State. 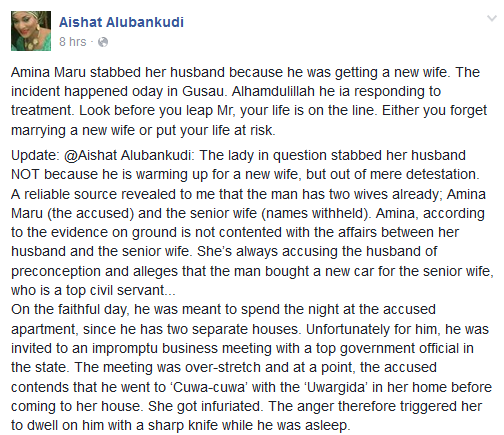 See The Customized Cake A Senior Police Officer Celebrated His Birthday With. Photos