The police in Ogun State have arrested two herbalists, identified simply as Quadri and Adam, for allegedly stabbing a man, Wasiu Balogun, and his friend, Wale Aderinto, to death in the Agbado area of the state. 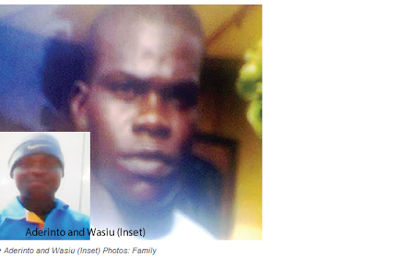 It was gathered that the herbalists, who are siblings, allegedly attacked Wasiu and his friend with knives for confronting them after they allegedly stripped Wasiu’s wife, Mutiat.

It was gathered that the incident occurred at about 7pm on Owonikoko Street last Tuesday. Our correspondent learnt that on the day, a teenage girl, Kabirat, who is the younger sister of the herbalists, had come to Mutiat’s house, and the woman had scolded her for failing to greet the people she (Kabirat) met in the house. Kabirat was said to have left the place in anger. It was gathered that Adam and Quadri, came some minutes later to Mutiat’s house, and started a quarrel, during which they allegedly stripped the woman and beat her up. PUNCH Metro learnt that neighbours tried to mediate, but the herbalists allegedly threatened to beat anyone, who intervened, with charms. Thirty-eight-year-old Wasiu, who worked as a vulcaniser, and his friend, Aderinto, a welder, reportedly came back from their workplaces in the Ebute-Meta area of Lagos State, and met distraught Mutiat at home. The two were said to have headed for the herbalists’ house after they were told of what transpired between Mutiat and the herbalists. Our correspondent gathered that on getting to house, matters degenerated, which led to the herbalists stabbing Wasiu and Aderinto to death. It was learnt that the neighbours reported the incident at the Agbado Police Division. The herbalists were subsequently arrested and detained. When our correspondent visited the area on Monday, Mutiat said everybody scolded Kabirat for failing to greet anyone, but she went to her house to tell her brothers another story. Mutiat added that the suspects stabbed Wasiu and his friend to death with poisonous knives. She said, “There was no fight on that Tuesday. The girl came to our house and ignored everybody. People in the house scolded her for it. “When the girl left, her brothers came some minutes later. They are herbalists. Their father is also a native doctor. They came with charms and knives. They beat me up. They stripped me. Neighbours tried to restrain them, but they threatened them. “When my husband and his friend came back from work, he was angry and he went to their house. They attacked him and his friend with knives. They were both stabbed to death.” There was no one to talk to PUNCH Metro at the herbalists’ apartment as both suspects had been moved from the Agbado division to the Ogun State Police Command headquarters, Eleweran, Abeokuta. The teenage girl, Kabirat, had also reportedly fled the area. A neighbour, identified only as Olumide, said the suspects were notorious in the area for violence. He said, “The suspects’ family worships Osanyin. They were involved in a similar violence sometime last year, but they were pardoned. The man and his friend had gone to talk to them for manhandling his wife. “The herbalists first attacked the friend, and when Wasiu held them, they stabbed him too. It was one of us who reported the matter at the police station. Wasiu had five children from his first wife, but I don’t know how many children Mutiat has for him.” The Ogun State acting Police Public Relations Officer, ASP Abimbola Oyeyemi, confirmed the arrest. He added that investigation was ongoing into the matter at the state command headquarters, Abeokuta.

Many Feared Dead After Horrible Accident Between Multiple Vehicles In Ogun. Photos

Photos From Mass Wedding Ceremony For The Handicapped Held In Gaza.