It was end of the road for five robbery suspects, Sunday, in Lagos, when their get-away car skidded off Eko Bridge by Iddo, while in flight, killing three of the suspects and one innocent bystander, a man who the car fell on. 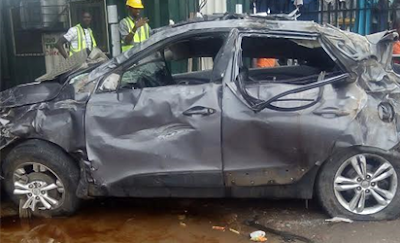 It was gathered that two of the suspects sustained injuries and were taken to the hospital, while the dead bodies were deposited at a mortuary. The incident was said to have occurred during the downpour at 2.15 pm. General Manager of the Lagos State Emergency Management Agency, LASEMA, Mr. Adesina Tiamiyu, who confirmed the incident, said preliminary investigation revealed that the occupants in the car could be robbers as several dangerous weapons were recovered from the car. According to Tiamiyu,

“the agency received a distress call regarding a lone accident at Iddo Bridge at 2.15p.m. yesterday. “On arrival at the scene of the incident, the Emergency Response Team, ERT, of the agency discovered a grey-coloured Hyundai ix 35 with number plates SMK 485 CM, which skidded off the Eko Bridge by Iddo Terminus and fell on a man, who died immediately.

“Three of the suspected robbers died immediately, one escaped with injuries, while the fifth was taken to the hospital by Lagos State Ambulance Service, LASAMBUS.

“The dead bodies, three suspected armed robbers and one other person identified as a mechanic named Nwamba, were handed over to State Environmental Health Monitoring Unit, SEHMU, and were subsequently taken to the mortuary, while the vehicle was towed to Denton Police Station, Ebute Meta, by the agency.”

According LASEMA boss, items found on the victims include one locally-made double-barrelled pistol with five live cartridges, one laptop, mobile phones and a dollar note.  Tiamiyu, who advised residents to always be security conscious at all times, said the matter had been handed over to Nigeria Police for proper investigation.

Ever Seen An Aquatic Elephant?; Meet The Mammal Who Swims In An Ocean. Photos

See How A Man Surprisingly Proposed To His Longtime Girlfriend On A Yacht. Photos