Anderson Esiti’s first half goal and an Alex Iwobi brace in the second half gave the Super Eagles a morale boosting 3-0 win over NPFL side Plateau United on Wednesday inside the National Stadium, Abuja 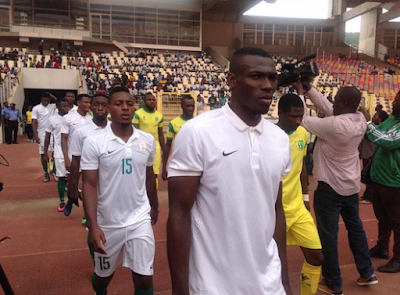 Coach Gernot Rohr lined up his wards for the practice game as he intensifies Nigeria’s preparations for Sunday’s all important Russia 2018 World Cup qualifiers against Zambia in Ndola. After struggling to click into gear in the early parts of the game, Belgium based Esiti slotted home from close range after some neat build up play from the midfield exposed Plateau United’s defense. Wholesome changes in the playing personnel at half time seemed to energize the Eagles as they ceaselessly besieged their opponents, confining them to their half of the field. Alex Iwobi initiated a swift counter attack and finished it off to double the Super Eagles lead and the Arsenal attacking gem would wrap things up late in the game when he blasted home his second, and the senior national team’s third goal of the night. Super Eagles Starting 11 First half – Ezenwa, Musa Muhammed, Madu, Jamiu, Agbo, Esiti, Shehu, Ahmed Musa, Chisom Egbuchulam, Nosa, Obaje. Second Half- Ikeme, Musa Muhammed, Echiejile, Omeruo, Ekong, Onazi, Mikel, Iheanacho, Moses Simon, Iwobi, Ideye.

Ndidi replaced Musa Muhammed late in the 2nd half.

Caption This Photo Of What A Woman Did To Her Daughter In Public.

See What Vigilante Did To A Thief Who Stole Car Stereo In Delta State. Photos