A police inspector, who had just left a commercial bank in Idimu area of Lagos State -was attacked and robbed by a three-man gang, which came on a motorcycle and unleashed mayhem on Monday. The robbers reportedly shot the inspector in the jaw before dispossessing him of his money. 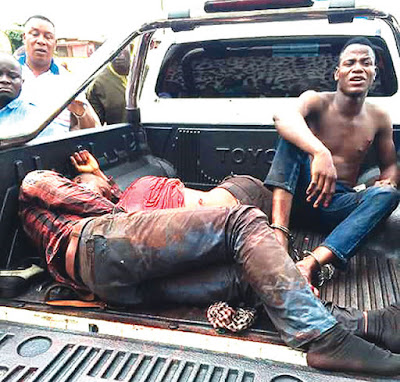 Our correspondent learnt that while the robbers were escaping from the scene, a police patrol team, attached to the Anti-Pipeline Vandalism Intelligence Unit, engaged the robbers in a shootout. Two of the robbers were reportedly killed during the exchange, while a surviving member of the gang, identified as Gafaru Ismail, was arrested. Our correspondent learnt that two pistols were recovered from the gang. The injured police inspector, who was not in uniform at the time of the attack, was reportedly rushed to a general hospital in the area, while the slain robbers and the suspect were taken to the Special Anti-Robbery Squad, Ikeja. A resident, who gave his name only as Ramoni, said the robbers targeted people leaving banking premises, adding that the inspector was the second victim. He said, “The incident happened around 11.45am. All of us suddenly heard gunshots down the road and we knew it was a robbery operation. Everyone was confused. The robbers, who came on a motorcycle, had first robbed a bank customer, before waylaying the inspector. “While they were robbing him, they sensed that he had a weapon and quickly shot at his jaw. They collected his money and were leaving when they were cornered by a police patrol team. “The patrol team engaged the robbers and killed two of them. They dragged their corpses into the van. The third suspect also sustained injuries, but he was arrested. It was after the arrest that most of us went out to see what was happening. The shootings were intense.” The Lagos State Police Public Relations officer, SP Dolapo Badmos, confirmed the incident. She said, “On sighting the operatives, the robbers opened fire and the team responded during which two of the robbers were hit by bullets.“They were confirmed dead in a hospital. The case has been transferred to SARS for further investigation.

“The suspect, Ismail, has been on the wanted list of the command for cases of armed robbery. Items recovered from the gang were two pistols, four live ammunition and one motorcycle.”

Drunkard Mistakes Woman At ATM As Friend, “Robs” Her As A Joke. Photos

Couple Ties The Knot In Style In A House Submerged In Floods. See Photos