One artist’s attempt to recreate the head of baby Jesus after a religious statue was vandalized by pranksters has scared the hell out of residents in Ontario, Canada. The statue, located in the yard of Sainte Anne Des Pins Roman Church in Sudbury, was vandalized last October, leaving Jesus’ head missing. 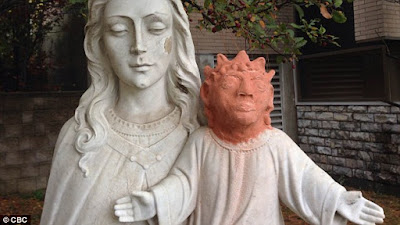 Heather Wise approached priest Gerard Lajeunesse about making a replacement, but the new terracotta head ended up looking weird more than a divine baby. The church priest said attempts to get a custom made replacement were rejected, and getting a brand new statue would cost the church upwards of $7,500 USD. While many church-goers were left shocked and disappointed, the priest tried to smooth things over, saying: ‘It’s a first try. It’s a first go.’ He added: ‘I wasn’t trained for this in seminary.’ 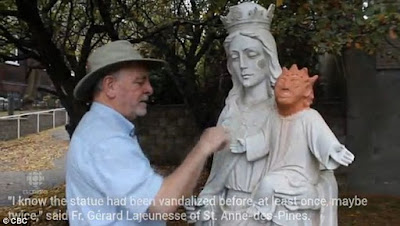 “My Wife Constantly Molests And Harasses Me” — Man Cries Before Court…

See What Dino Melaye Did After He Was Confirmed To Have Graduated From ABU. Watch Video