Justice M.A Onyetenu of the Federal High Court sitting in Port Harcourt, Rivers State has convicted and sentenced a former banker, Ikechukwu Chukwuma, to six months imprisonment for defrauding his bank, Diamond Bank, a sum of N28, 000, 000. 00(Twenty Eight Million Naira). The judge also ordered the convict to pay the sum of N15, 000, 000. 00 ( Fifteen Million Naira) as a restitution to the bank. 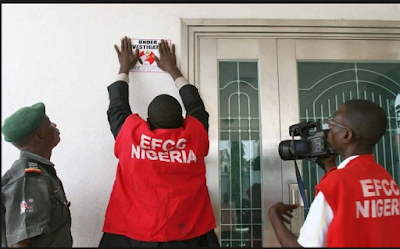 The sentence is to run from the day he was convicted. 15 March, 2016. Also, an illegal oil bunkerer, Basil Anoliefo was convicted and sentenced to one year imprisonment. Chukwuma, a Resident Internal Control Auditor in charge of Ikwerre Road and Oyigbo Branches ( both in Port Harcourt, Rivers State) and Yenagoa Branch (Bayelsa State) of Diamond Bank Plc, used his position and influence to fraudulently transfer the sum of N28, 000, 000. 00 into his account. He was first arraigned on 2 July, 2012 where he pleaded not guilty to the charge. Justice Onyetenu found him guilty of the three count charges proffered against him and sentenced him to six months imprisonment accordingly. In the same vein, Justice Onyetenu convicted and sentenced Anoliefo to 12 months imprisonment with hard labour for illegal dealing in petroleum products. The judge found the convict guilty of two count charges of conspiracy and illegal dealing in petroleum products brought against him by the EFCC and sentenced him to 12 months imprisonment with hard labour.

The sentence is to run from the day he was convicted, 9 May, 2016. Anoliefo was arrested by Shell Petroleum Development Company, SPDC and handed over to the EFCC on 15 April, 2008. The convict was first arraigned on 15 March, 2011 where he pleaded not guilty to the charge. ‪