A forty-year-old man, John Friday Akpan from Akwa Ibom State resident in Calabar the Cross River State capital, is now explaining to the police how he heeded the advice of a herbalist, “Dr.” Okokon and eventually tagged his two children, Elisha Friday Akpan and Esther Friday Akpan as witches and wizard. Calabar: Man Accuses Own Children of Witchcraft, Nails Them On The Cross 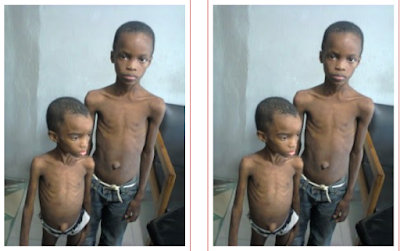 In a bizarre story reminiscent of the nailing of Jesus Christ on the Cross, Friday Akpan subjected his two children aged, 12 and 6 respectively, to harrowing treatment by nailing them to a plank in shape of a cross and locking them up in a dark, thatch hut without food for weeks. He claimed that the children took his money to their “master in the witchcraft coven and therefore deserve no mercy”. He told the police. Following weeks starvation, the two children whose emaciated and dirty physical appearance replicate the gory images of starving children in famine-ravaged Somalia and war-torn Sudan said they survived by water which was supplied to them by one of the man’s kids from another woman. “Our sister, Peace usually bring us water inside the hut when our father and our mother had gone out”. Esther said. Their father, the kids said, used to reside in Akpabuyo, Cross River State, Nigeria with the family where he sent them to a private school, Regent Nursery and Primary School, Ikot Nkanda but when their mother died and the man took another wife, Iquo, the story changed. “My mother (stepmother), said the woman who used to live near our house in Akpabuyo gave us food and she put something (witchcraft spell) in the food and when we ate it we changed to bird at night and took our fathers money to ‘our master’ in the witchcraft world”. Elisha who is a JSS one student of Regent said. According to the kids, Elisha was alleged to have taken 4,000 Naira while Esther took 2,000 Naira and that angered their father and step-mother who started beating them severely and denying them food “because they said we took their money to our master in the witchcraft coven. This is something I don’t even understand”.