The State Security Service (SSS) says it has arrested 10 suspects for alleged kidnapping in Kogi state. These suspects are reported to have been terrorising the state as well as attacking people travelling on the Abuja-Lokoja highway. Punch reports that they were paraded in full military uniforms by the Director of the Kogi state command of the security organisation, Mr Joseph Okpo, in Lokoja. 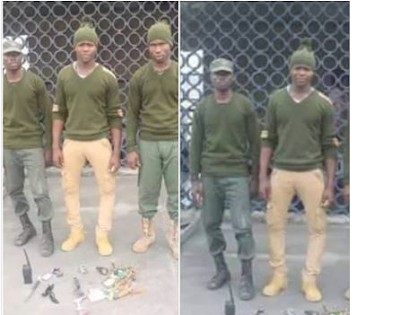 According to Okpo, six of the suspects were arraigned on Tuesday, July 26 while adding that the command had arrested four members of the gang whose names he gave as Haruna Saleh, Kabiru Shuaibu, Mumuni Adamu and Tukur Shuaibu. The suspects, according to the SSS director, confessed to different crimes and are giving useful information about how they got the uniforms. The security chief said investigation had shown that most of the kidnappers operating in the state are not residents. They only take advantage of the geographical location and the route structure of the state. He said his command would continue to liaise with other security organisations to rid the state of criminals.

On Saturday, July 23, 2016, the Department of State Services ( DSS) also announced the arrested one Jones Abari, aka General Akotebe Darikoro, for playing a major role in the alleged fake plan to overthrow President Muhammad Buhari by the military.

Ontario MD Weeps In Court After Being Jailed For 10 Years Over Subsidy Scam. Photos