Former Liverpool, West Ham United and Cameroon defender Rigobert Song is reportedly fighting for his life after being rushed to hospital in the country’s capital Yaoundé following a stroke. 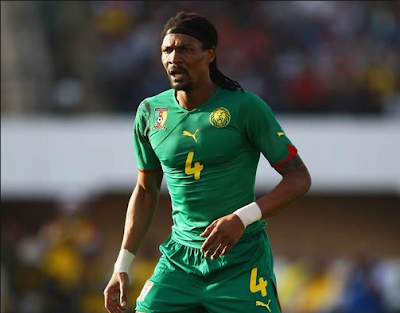 Song who is currently the head coach of Chad’s senior national team is in a critical condition after suffering from cerebral aneurysm, The Guardian reports. The football world was quick to unite in support of the 40-year-old popular ex-player, who won more than 100 caps for Cameroon. Fellow Cameroonian Samuel Eto’o posted a picture of Song with the caption: “I wish you a lot of courage and a speedy recovery big brother!” Liverpool’s Official Twitter site also offered its support, alongside numerous ex-players. Song was one of Gerard Houllier’s first signings as Liverpool manager in 1999, having started his professional career at French side Metz. He became somewhat of a cult figure after his £2.7 million move making 35 appearances for the Merseyside club before joining West Ham United in 2000.

EFCC Discovers Over N400 Million Hidden In A Shopping Plaza In Lagos. Photos