ISIS ringleader Abu Bakr al-Baghdadi is reportedly seriously ill after having his food poisoned by an assassin. Meals prepared for the ISIS leader and three other commanders of the terrorist organisation were allegedly poisoned in the Be’aaj district, southwest of Nineveh. 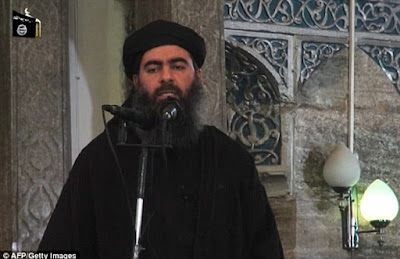 A source told Iraqi news agency WAA the four are suffering from ‘severe poisoning’ and ‘have been transferred to an unknown location under strict measures.’ The terror group have reportedly launched a campaign of arrests to track down those responsible. Baghdadi has reportedly been wounded multiple times. Earlier this year there were reports he had been killed by US-led coalition air strikes, but they turned out to be inaccurate.

2 'One Chance' Operatives Apprehended By Task Force In Lagos. Photos

Man With The World's Biggest Manh0od Reveals He's Happy To Be Famous. Photos