A 28-year-old pregnant lady disrupted a wedding ceremony at the Sepaase Grace Baptist Church in Ghana -upon hearing that her partner with whom she has one child was getting married to a member of his congregation. Akua Afriyie stormed the church premises with a bottle of Schnapps when the would-be couple was being introduced ahead of Sunday’s ceremony to the surprise of many congregants. 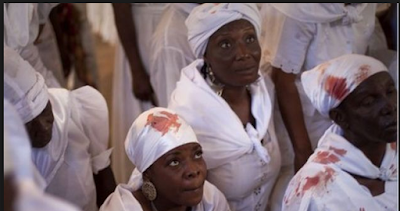 She invoked curses on Kofi Boateng and his bride-to-be, the pastor who was to bless the planned marriage as well as relatives and church members who would attend the wedding. Unapologetic Madam Afriyie revealed to Nhyira FM’s Obra show she has lived with Boateng for over five years and is seven months pregnant with him. Mr Boateng is the Youth President of the church who was living with Madam Afriyie at the mission house until the church de-fellowshipped him for six months for fornication following his relationship with Madam Afriyie. The church sanction forced the two to live in separate residences for about two years although they were still seeing each other. Madam Afriyie said she recently heard Mr Boateng is about to marry another lady. According to her, she went back to Mr Boateng two months after she had delivered their baby, now two-years-old. She said after they had unprotected sex on the day of the visit, she insisted on spending some days, a proposal Mr Boateng turned down for fear of the church finding out he was still fornicating. A quarrel ensued between the two lovebirds then and she confirmed that there have been a series of quarrels since as they disagree over every issue.

Kofi Boateng who confirmed that he is getting married on Sunday added he couldn’t marry Madam Afriyie because of her tendency to invoke curses at the least opportunity. He also said his relatives are against their relationship.

Woman Stabs Her Lover To Death For Tearing Picture Of Her Late Boyfriend. Photo