The General Overseer of a Pentecostal church, Pastor Chris Anyalebechi, was on Monday arraigned before a Federal High Court in Lagos over an alleged N85 million fraud. 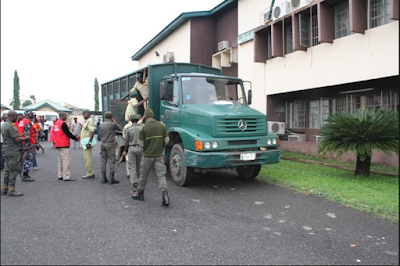 Pastor Anyalebechi, who is the General Overseer of Christ Glory International Gospel Centre, at Lasunwon, opposite Lagos State Polytechnic, Ikorodu, Lagos State, was arraigned before the court on counts of conspiracy to defraud and obtaining under false pretence. According to the Special Fraud Unit prosecutor, Mr Effiong Asuquo, a Chief Superintendent of Police (CSP), Anyabelechi was alleged to have sometimes between April 2014 and March 2015, conspired with some other persons now at large, obtained the said sum from one Nestor Nwankwo of Zicozeen Nigeria Limited, under false pretence of buying used ship, and sell same in parts or scraps on behalf of the company.

The presiding judge, Justice Mohammed Idris, admitted bail to the General Overseer in the sum of N10 million and adjourned the matter November 28, for trial.

Billionaire Ayiri Emami Pictured With Dangote And Oshiomhole At Eko Hotel In Lagos..

“15 Years Ago She Went To Visit Her Cousin At The National Assembly, Now She Works There”. Photos

Photos; SS2 Student Finds Purse Filled With Cash On Her Way Home. See What She Did.