A Florida father has been left devastated after his brand new Samsung Galaxy Note 7 burst into flames and torched his family car.Nathan Dornacher, from St Petersburg, Florida, said he was charging the phone inside his custom Jeep Grand Cherokee when it caught fire, burning both to a crisp. 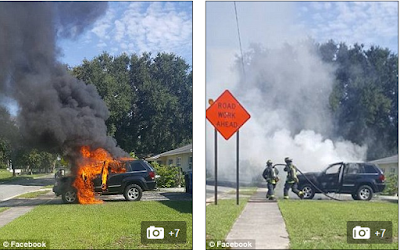 Samsung have issued a worldwide recall for the Note7, saying problems with the battery can cause it to explode or catch fire. While fire officials have not said whether that was the cause behind this fire, Dornacher told Fox 13 News that the blaze started around the charging phone. The father-of-one said he had not heard about the recall, which was issued just five days before the fire broke out. Posting pictures of the blaze on Facebook, he said:

‘We went to a garage sale to grab a desk for my daughter, got back to the house and unloaded the car.’I left it running with the AC on to keep the car cool as we were planning on grabbing the dog and heading to Petco.

‘I went back out to the car to grab my phone which was on the charger (me and Lydia always fight over the house charger), went to open the door and saw flames inside. ‘I opened the door and the car is engulfed. I ran inside to get extinguisher and of course it’s not to be found. I yelled at Lydia to call Fire Department and here is the end result.’ 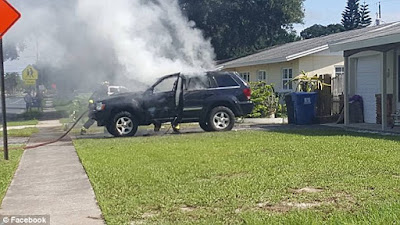 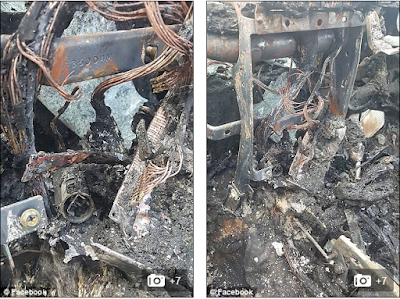