A 26-year-old mechanic at Aboabo, a Muslim populated area in Kumasi, Ghana -was reportedly shot dead over silver rings and chains last Friday evening. Taric Sadiq, the deceased, was reportedly shot in the head by one Toffic Tahiru Mohammed, who had since that incident allegedly gone into hiding. 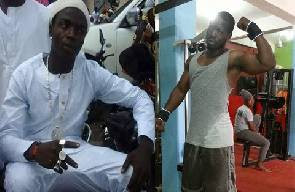 Sadiq’s chains and rings were said to have been seized by Toffic and the former’s attempt to get them back resulted in his demise. He and his friends reportedly went to Toffic’s house at Sepe Junction to collect the jewelry but in the process confusion ensued between the two. Toffic, who was said to be extremely angry, allegedly dashed into his room and returned with a long gun which he used to shoot him (Taric). The suspect, who perhaps felt remorseful after committing the heinous crime, rushed Taric to the hospital for treatment, but he was pronounced dead on arrival.

Meanwhile, the mortal remains of Taric were buried Saturday morning at the Tafo cemetery after Muslim prayers at the Aboabo school fiel

Photos; See The Massive Fish Which Is Being Sold For Over N60 Million