Meet the Syrian refugee who jumped off a sinking boat , and with the help of four others pushed it across the Aegean Sea in the Mediterranean to land, saving the lives of 20 people. 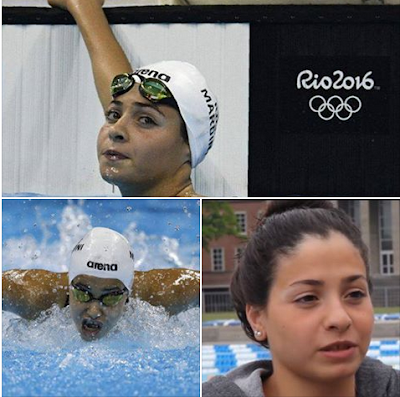 “It was quite hard to think that you are a swimmer and you might end up dying in the water,” Syrian refugee Yusra Mardini said in an article on the Rio Olympics website. Yusra, 18,who now lives in Berlin, was a professional swimmer in Syrian before she fled the Syrian war with her sister in 2014. Syrian refugee Yusra Mardini, won the women butterfly swimming contest in on first day of Rio Olympics as first participant from the member of the 10-strong Refugee Olympic Team in Rio de Janeiro. However, she will not be moving to the semi-finals because she is 41st place overall and only the top 16 swimmers moved on to the semi-final round.

Villagers Gather At The Residence Of Delta State Governor As He Arrives Home For Christmas. PICS