A Nigerian man has narrated his encounter with former governor of Anambra state, Mr Peter Obi, on a train in the United Kingdom. The man revealed how awed he was by the politician’s simplicity. 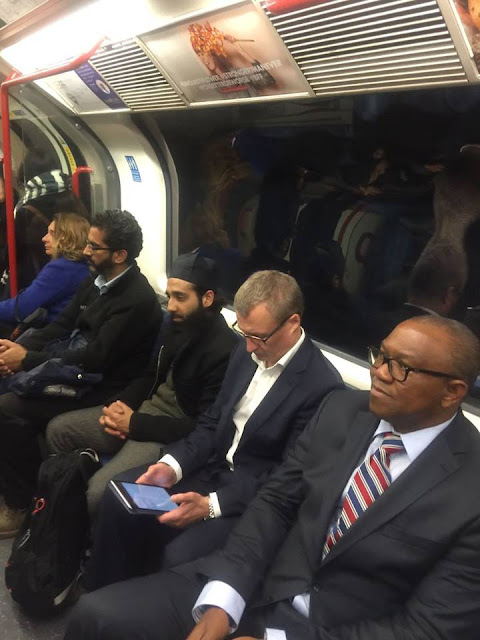 Read what was shared on Facebook by Apga Alaigbo

We do not know each other, but I follow you closely on Facebook. I am from Anambra though I live in the UK. I have heard so much about our former Governor, Mr. Peter Obi.

We became more interested in him after the platform speech. Even in my work place, Nigerians there debated the speech. We agreed that if indeed all he said were reflection of his life, that we have at last discovered a NIgerian fit to be entrusted with national leadership. Though some of us swore that that was how he lived, some of us, including me, were are a bit skeptical.

Today, this morning, as I was in a train going to work, he entered and at first stand when all seats were occupied. He later sat down. Out of curiosity of meeting a Nigerian of his status scrambling for train, I got his pictures.

There is nothing wrong with entering train like every other person. In the UK and others climes, former high government officers join public transport and are happy. In fact this is one of the reasons they strive to lead well, because what they provided would be what they will enjoy.

In the UK, what former Governors and others do is to cruise around city in limousines.

After the snapping, I went to meet Mr. Obi who told me that he would stop at Green Park and that he was going for Commonwealth meeting at Marlborough House.

It was happy I met and engaged him.

Usain Bolt In Tears As He Carries Coffin Of His Best Friend At His Burial. Photos