A pregnant woman who was forced into prostitution has been rescued from a gang in Ibiza. She and dozens of other women, most of which were underage, had been forced to work for a prostitute gang on the Spanish holiday island. 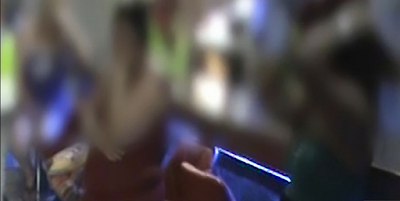 They had been recruited by the Romanian gang after the men had persuaded the girls to start a relationship with them and then asked them to join them for a new life on the island. Once there however, away from friends and family, they were beaten and forced to work as prostitutes. The pregnant woman who was among those rescued had been lying on the floor getting a further beating from her captors when police burst in and rescued her. She said she had been kneeling there for six hours without food or water.

The police operation was launched after one of the women managed to get hold of a phone number for a newly established police hotline to report the abuse, and it resulted in an investigation that led to the arrest of the Romanian gang.

See What A Bride Was Filmed Doing To Her Man At Their Wedding Ceremony.. Photos