A 35-year-old pastor’s wife in Ghana has invoked curses on a church member for allegedly having an affair with her husband. The angry woman, Janet Akosua Amoako claimed she caught her husband red-handed in the lady’s room eating dinner. 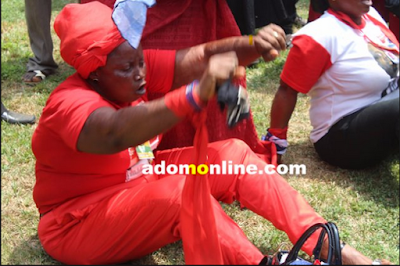 “We are all in the same church but all of a sudden my husband started behaving strangely till I caught him talking on phone with that woman. She has been pestering my husband and calling him everyday even at night and even cooking for him to eat,” she explained to Nhyira FM’s Naa Amerley Thursday.

Akosua noted that, her suspicion heightened when her husband, who is a deacon in a popular church in Kumasi, began sleeping outside and coming home at dawn. It was at this stage the mother of a 40-day-old baby physically confronted and invoked the dreaded ‘Antoa Nyama’ deity on the lady who is also a member of the Women’s Ministry for wrecking her home. Akosua Amoako revealed that, when the issue was brought to the attention of church elders, the lady was expelled from the church but she still continued the amorous relationship with her husband whose name was only given as Deacon Kennedy. When she confronted her husband about the issue, the angry deacon rather sent his wife packing from her matrimonial home. To make matter worse, Akosua said the husband has disconnected electricity from the house they share because she refused to move out of the house.

The distraught woman added that, her husband later hired a truck and packed all her things it and took them to her relatives to end their marriage

Caption This Cute Photo Of A Baby “Trying To Help” Crying Lionel Messi.