A nominal roll containing 30 names of suspected members of a dreaded militant group, the Bakassi Strike Force (BSF) has been recovered by the troops of Joint Task Force (JTF), Operation Delta Safe (ODS). 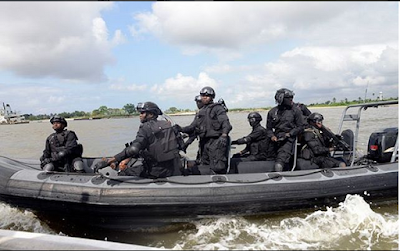 The Deputy Coordinator, Joint Media Campaign Centre (JMCC), Lt. Com. Thomas Otuji, who confirmed the development, on Thursday, in a statement in Yenagoa, said the payroll was found when the troops stormed the hideout of the militants at Efut Esighi, Bakassi Local Government Area. Otuji said the troops also combed another hideout of the militants at Creek Road by Slaughter in Anantigha, Calabar South, adding that the ODS was studying the names in the list to track and arrest them. He said during the raids which were carried out in company with special boat services, the troop arrested three suspected militants including one Moses Okokon, popularly known in the creeks as Alomo. He said when a Camry Toyota vehicle seized from Alomo was searched, sentry duty roasters, 73 wraps of substances suspected to be Indian hemp and the payroll were found in the vehicle. He said the Special Boat Service (SBS) was included into the operations of ODS to to get rid of criminals operating in Southern Cross River State especially at Bakassi and Akpabuyo Local Government Areas. “Troops of Sector 4 while on patrol apprehended two suspected militants that stole two high-power outbound boat engines from boat operators. “They were about selling the engines at Aqua Beach when the troops arrested them. The arrested suspects, Mr. Elijah Daniel and Francis Shedrack were subsequently handed over to Nigeria Police Force for further action”, he said. Otuji further said that different sectors of ODS stormed various creeks in the Niger Delta region and destroyed many illegal refineries. He said illegal refineries were destroyed at Opumami and Okogho creeks in Warri South and Warri North Local Government Area, Delta State. “Bunkerers abandoned the site and fled on sighting the patrol boats”, he said adding that 16 cooking pots, two Cotonou boats filled with crude oil and and wooden shelters were destroyed by the troops. He named other items and weapons recovered at the sites as one carton of 70 mm ammunition, three pumping machines, two deep freezers, one generator and one 55 HP speedboats. He said in Rivers State a detachment of Sector 3 destroyed illegal bunkering sites along Bille creek during a routine patrol. “No arrest was made as bunkerers fled the site on hearing the sound of own patrol boat. Similarly, while on anti-illegal patrol at Ogbongha and Bille creeks at Bonny Local Government Area, troops found five illegal oil dumps with five drums of stolen crude oil. “The troops also found one 85 HP speedboat, four pumping machine, one welding machine, three parks of welding electrodes, two compressors, one generator, six shovels, three handsaw, one manual jack and 10 bags of cement”, he said. Otuji said the air component of ODS conducted surveillance operations over Bille – Rivers State destroying storage tanks and barges suspected to be loaded with illegal crude oil. He added that troops operating in Delta State foiled an attempt by kidnappers following distress calls by well-meaning Nigerians. “Troops immediately swung into action and rescued the victims. One Mrs. Vanessa Ilepi and Mrs. Tega Okoro were kidnapped at gunpoint along Amukpe in Warri. “One of suspects Mr. Daniel Egbelu was arrested while two escaped. Effort is ongoing to apprehend the escaped suspected kidnappers. A locally cut-to-size made single barrel gun was recovered from the arrested kidnapper.

“Members of the public are therefore urged to provide useful information to own troops in order to apprehend these criminals. Operation Delta Safe will continue to ensure conducive environment for legitimate businesses to thrive within its joint operation area in line with its mandate”, he said.

Fuel Scarcity; The Hustle For Petrol Is Real; Caption These Photos.

See What Happened To An “Unfortunate” Thief While Trying To Jump A Fence In Kogi. Photos/Video