South Africa’s Wayde van Niekerk broke a 17-year-old world record at the Rio Olympics, to win the gold medal in the 400m. The 24 year old track and field sprinter clocked 43.03 sec to beat Johnson’s 17-year world record of 43.18 sec. “I believed I could get the world record. I’ve dreamed of this medal forever,” said Van Niekerk. “I am blessed.” 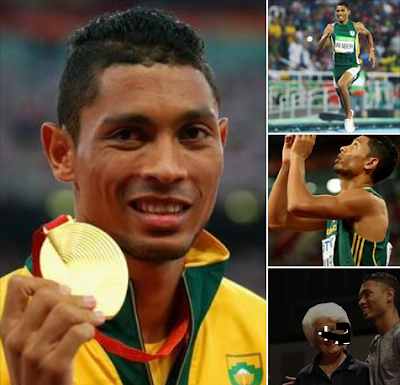 Wayde has 74-year-old veteran coach, Anna Botha, since 2012 Olympics who is a former sprinter and long jumper. “I’m really grateful I can go on the track and say my coach has pushed me to reach every level and believe anything is possible… She’s an amazing woman. She’s played a huge role in what I am today.” Said Wayde to CNN

See What This Model Has Promised To Do If Her Favourite Team Wins The Champions League….

Mother Refuses To Take Painkiller After Accident So She Could Breastfeed Her Baby. Photos

5 Suspects Arraigned Over The Killing Of Woman In Kano State Over Alleged Blasphemy. Photo