The Central Crime Branch (CCB) officials, have arrested two Nigerian nationals and recovered 50 g of cocaine worth Rs. 2.5 lakh from them. The accused – Nduba Joseph (25) and Nwite Sunday Rose (32) from East Nigeria – were nabbed from an apartment in Indiranagar where they were staying. 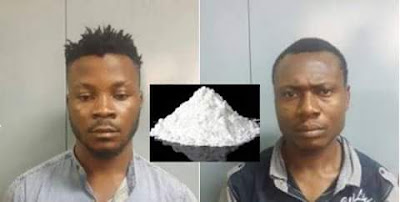 The accused reportedly confessed that they used to get cocaine from their contact, identified as Ben from T.C. Palya, and sell it. The police have booked the duo under Narcotics Drugs and Psychotropic Substances Act, 1985, and remanded them in judicial custody. Efforts are on to nab Ben, who is said to be on the run.

The police have also seized their travel documents for further investigations.

Teenage Cultist Arrested After Beheading His Rival In Lagos Metropolis.

Many Passengers Dead As Truck Falls On Vehicle In Benue State. Graphic Photos

Woman's Chunk Of Flesh Gets Ripped From Her Leg In Freak Escalator Accident. Photos