In continuation with clearance operation of the remnants of Boko Haram terrorists hibernating in remote border towns and villages, troops of Operation LAFIYA DOLE have cleared Kareto town since Monday 25th July 2016. 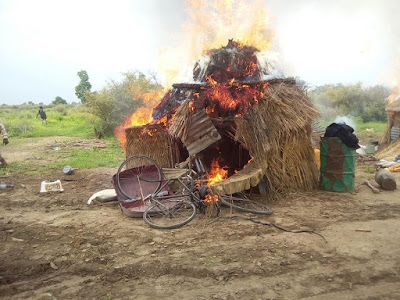 The gallant troops are stabilizing the immediate environment, while others are maintaining blocking positions at various areas. In the same vein, yesterday, troops of Operation GAMA AIKI under the auspices of the Multinational Joint Task Force (MNJTF), have successfully cleared Dutchi and Damasak towns. In due course, the troops of both Operation GAMA AIKI (MNJTF) and Operation LAFIYA DOLE would link up with each other to continue the clearance operations. Thank you for your usual and kind cooperation. Colonel Sani Kukasheka Usman

Re; “Nigerian Army Did Not Kill Kidnapped Pastor In Rivers State”.

Unbelievable! See Photos Of A Chicken With Two Horns….

See The Shameful Way Children Are Being Taught In Some Schools In Jigawa State. Photos