The commission of inquiry set up by the Kaduna state government over the “Zaria massacre” of December 12-14, 2015 has asked the federal government to prosecute the soldiers responsible for the killings. 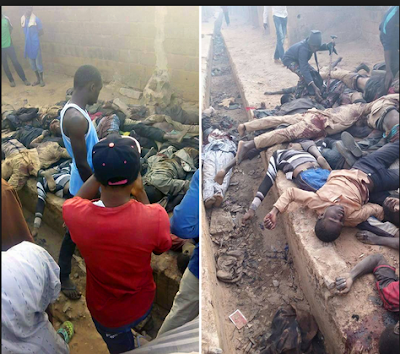 As many as 349 persons, including a soldier, were killed when members of the Islamic Movement of Nigeria (IMN), also known as Shia or Shi’ite, clashed with soldiers after blocking the convoy of the chief of army staff on the Zaria highway. The commission said the “use of excessive force” by the Nigerian army led to the heavy casualties and recommended that the federal government should take “immediate steps” to identify the soldiers who participated in the killings “with a view to prosecuting them”. In the report, which was released on Sunday evening by the Kaduna state government while a nine-person panel works on the white paper, also recommended that Sheikh Ibraheem EI-Zakzaky, the leader of IMN, should be held “personally responsible” for the action of his members because he has “total control” over them.

Meet The 12-Year-Old Girl Who Can Assemble A Rifle Faster Than The Police. Photos

Man Who Cut His Wife's Throat Over Infidelity In Oshodi Has Died. Graphic Photos