Following a bomb explosion along Banki, Usmanari, Kumshe road in Borno State, two soldiers of the 152TF Battalion of the Nigerian Army have been feared dead. The explosion which occurred at about 8:10 a.m. this morning also left no fewer than eight soldiers injured, Premium Times reports. 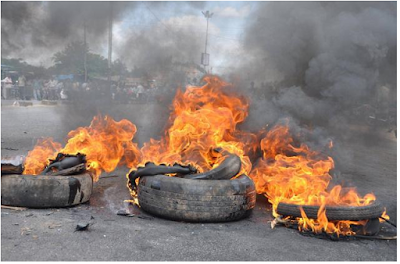 According to the report, the explosion destroyed one canter truck, while the injured persons are currently receiving first aid treatment before they are evacuated by air to a hospital. However, the Army has not released any official statement regarding the incident as at the time of filing this report.

See The Moment Peru's Most Wanted 'Drug Lord' Is Handed Over By Colombian Police. Photos

Young Boy Survives Horrific Burns After Being Involved In A Fire Mishap. Photos

Cultists Go On Rampage As They Fight Over Girls In Ogun State…..