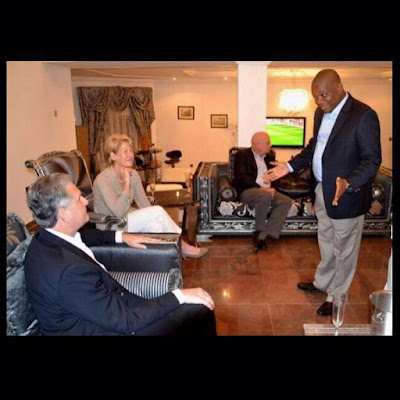 I just arrived the United States of America from the United Kingdom and trying to locate where I kept my keys and later see how I can get some rest after the long trip. Everything sorted out, refreshed, I have to relax on the internet to keep myself abreast of the goings on in the world, especially my dear country, Nigeria, before delving into the few concerns that took me out of Nigeria.

I dare say with the advent of the social media, take it or leave it; it has in a way given credence to democracy in the country to continue to flourish beyond imagination; now people can express themselves, either on personal matters or matters that affect them through policies of the government. And there can be no better times than this when the country is grappling with recession and the government is doing everything round the clock to bring the economy right on track and begin to bring back that lost smiles and hope on the faces of dejected, and atimes, disappointed and frustrated Nigerians, notably the Nigerian youth who are in dire need to see change in their lives.


The beauty of the social media platform is the protection and assurance of the screen and the use of fictitious identity where issues can be raised or issues criticised without the fear of intimidation from any areas.

I am a regular visitor to the various social media, especially Facebook and Whatsapp. You cannot be older than this trend in the twenty-first century if one really wants to keep in touch with latest happenings. Some of these happenings could really be brash and gossipy without any truth to them, so one has to be careful in the kind of information that is allowed to filter into the brain because without this caution wrong and hasty decision could be reached.

On Facebook and Whatsapp, as I am scrolling through my phone, the most provocative trending is the thirty year old young man who has been remanded in prison custody for failure to meet his bail terms that include the payment of a fifty thousand naira fee for giving his dog a name. To me, this should be a laugh for all Nigerians to ease off the present tension everywhere in the country.

I am not a lawyer, but there are issues, to my understanding, that should not be brought to the attention of the law, instead, it should be dealt with amicably between the parties involved with caution by the police therefore not giving it the national attention whoever is involved wants to generate.

Or, still, the judge, if I am speaking the minds of many who do not take themselves too seriously or see life as a war to be won or lost, would have thrown the case out of his court for lacking a standing in jurisdiction.

While still scrolling and enjoying the story-forgive me for this, because the only thing I see in the story is the fun it is generating inside of me right now- the question in my mind is, is the presidency aware that a thirty year old Nigerian is in custody because he is accused of trying to upset public peace and because he cannot afford to meet his bail terms when arrested by the Nigeria Police force and charged to court?

I can authoritatively say the presidency is not aware of this huge joke at a time when its hands are full with both political and economic crises and the issues of the Nigerian youth it is bent on addressing since it came into power in two-thousand-and-fifteen.

Another question in my mind while the laughter inside of me continues to grow is, would the young man had been shown the road to the court if he had bought a one-million-naira shirt and gave it whatever name? Perhaps no. A dog is chosen instead of some expensive and adorable ornaments.

It boils down to the way we treat animals in the country, especially one that has been acclaimed to be human friendly. Elsewhere, will there be a court case if a name is given to a particular animal? I do not think so; nobody would have thought it as something to have sleepless night and good time over. And, moreover, the dog on the screen of my phone happens to be so adorable and beautiful worthy to be domesticated.

The young man has said the reason he gave that particular name-which is not narrowed down to any particularity- to the dog is because of his love for it, whereas others think otherwise, which now becomes a case between the young man having a good and intelligent lawyer to argue his case, which again may just be impossible in a situation where legal aids do not come easy and definitely beyond one who cannot cough out fifty thousand naira.

On Whatsapp, comments have been agog. Some say the young man has erred. Others say he has no respect for the elderly. And yet others bring cultures and tradition into the argument while the young man languishes in cell.

Not any of these commentators ones gave a thought to one of the characteristics of democracy, which is the fundamental human rights of the individual where freedom of expression can only be negotiated on the table of intentional assault, in this case, which the young man has said is not his intention.

The name is as a result of his mentorship interest and the love for the person that is supposedly involved.

One of the commentators had said, as a father, what one’s reaction would be if a child had walked up to him and say, ‘Father, I just bought this dog and I have given it the name, Arochukwu?’ if Arochukwu happens to be the son’s father’s name.

I will not only respond to the child as a father, but as a leader, too. First, I will have a good laugh that my child did not go to the market to buy a Tortoise and name it after me-we know the connotation of Tortoises in the Nigerian folklores- and secondly, I will tell that child that he should make sure he gives the dog a good training so that it can be responsible to all concerned. And, thirdly, I will pat the child’s head and tell him to go inside and study while I go about my duties as a father and a leader deliberating on serious issues and not on trivia that will take nobody anywhere rather than downing some good and fun creativity because it is all a matter of common sense without a particular issue of note.

Randy Couple Filmed Having Sex In The Middle Of An Internet Cafe. Photos/Video