Lagos State Governor, Mr. Akinwunmi Ambode on Thursday demonstrated his commitment to attract foreign investors into the State by approving land for the establishment of a training centre in Lagos where architects, civil engineers and craftsmen will be trained on modern trends and technologies in the construction sector. 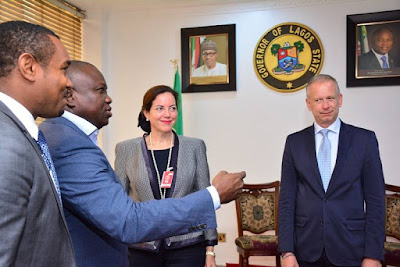 Governor Ambode, who gave the approval when he received a delegation from The Knauf Group, which is a German firm currently establishing a $75miilion building/construction tools manufacturing factory in Lagos, said the approval for the land became imperative in view of the need to encourage investors to continue to invest in Lagos. The Knauf Group is one of the world’s leading manufacturers of modern insulation materials, dry lining systems, plasters and accessories, thermal insulation composite systems, paints, floor screed, floor systems, and construction equipment and tools. The delegation was led by a member of the Management Committee of the firm, Isabel Knauf and Consular General of German Embassy in Lagos, Mr. Ingo Herbert. Governor Ambode, who recalled the last time Herbert visited the Lagos House about eleven months ago, said his administration has remained focused to the promise of upholding judicial and security sector reforms, as well as creating a friendly environment for investment to thrive. He said the massive investment by The Knauf Group in Lagos was a pointer to the fact that investors were still willing to invest in Nigeria despite the economic recession, and that the country will come out of the economic doldrums even stronger. “I must commend the German government and The Knauf Group for showing something important to all Nigerians that beyond the economic recession, their total believe in our economy is unshaken because it is not enough for any investor to come into an area where they have never invested before and months after, the parameters for investment are not really looking good, but you stuck in there and beyond the fact that you have gone to procure land, you also have an established office within the last eleven months and you are already pumping in money into what you want to do. “This is a great pointer to the fact that you believe in the Lagos economy and also believe in the future of Nigeria and I like to encourage other investors to emulate what your firm and government is doing in Lagos and as they show interest, we will not hesitate to give them the necessary support,” the Governor said. Governor Ambode said The Knauf Group specifically deserved to be commended for not just investing in Nigeria, but also bringing the German vocational expertise on an area of construction that was hitherto not in existence in Nigeria into Lagos. Besides, the Governor said he was excited about the fact that the firm was not just establishing a factory here in Lagos, but also a training centre where Nigerians will be trained, adding that he would stop at nothing to encourage investors such as The Knauf Group. Earlier, Isabel Knauf said the team was at the Lagos House to brief Governor Ambode on the progress made so far since the project started in September 2015. She said the firm has 23 training centres all over the world training about 14,000 people annually, and that they would like to build the same training centre in Lagos where architects, civil engineers and craftsmen would be trained on how to technically install their products. She said upon completion of the factory, the firm would create 25,000 direct employment, adding that the training centre will cost about two million Euros to establish, while at least 800 Nigerians will be trained annually in the first phase. Knauf, however, solicited the support of the State Government in land space for the training centre and permit issues, a request which was instantly granted by the Governorb 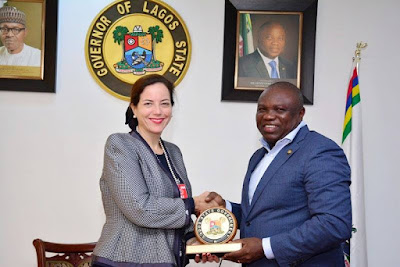 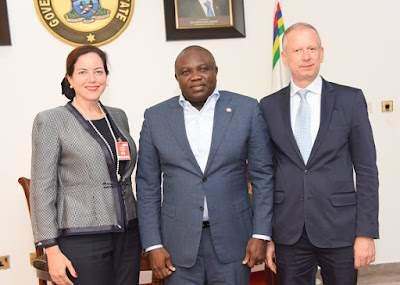 US Ambassador To Nigeria Pays His First Official Visit To Enugu State. Photos

Gambian President-elect, Barrow Pictured With His Family Ahead Of His Inauguration